Yoga — the Way to the Good Heart. One of Pranayama Curative Mechanisms

The basic specific feature of human cordis anatomy lies in availability of conduction system that generates and maintains uniformity of cardiac rate. The structure can be represented in the following way, in the order of excitement generation and transmission:

1. The Keith and Flack node (nodus sinuatrialis, or pacemaker) is situated in the wall of the right atrium by cavas entry.

3. Atrioventricular His band that bifurcates into left and right stalks. 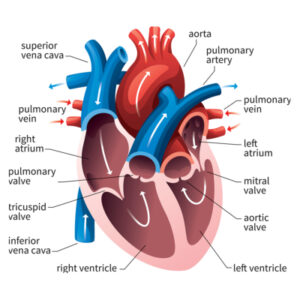 There are also various conduction tracts that connect right and left atriums. Within natural cardiac pacemaker there emerge electric impulses that pass through atriums inducing their contraction and proceed to the atrioventricular (i.e. the one of atrium and ventricular) node located at the borderline between atriums and ventriculars.

Further on the excitement is spread through conducting tissues onto ventriculars, thus causing their contraction. After this, the heart relaxes up to the next impulse that launches a new cycle.

In terms of histologic anatomy conducting system comes as atypical muscular tissue that in its structure is similar to the embryonic tissue. The conducting system is unique due to its automatism capacity, i.e. ability to generate activating impulses independently from processes that happen in nervous system and organism in general; this has been verified by cordis excision experiments: should certain provisions be provided, the heart may preserve its mechanism of contraction and relaxation even when beyond organism, by this keeping proper rhythmic rate.

Under conditions of organism integrity cardiac activity is regulated by sympathetic and parasympathetic nervous system as well as by suprasegmental apparatus of vegetative system and cerebral cortex.

In recent years, our native physiologists (V.M. Pokrovsky and collab.) have advanced an assumption that but for its corrective influence nervous system may also produce a launching effect upon cardiac rhythmic beat, and basing upon numerous experiments they have formulated a concept of “central generator of cardiac rate” existence. The main task of this formation consists in elaboration of adaptive reactions on the part of cardiovascular system under its natural conditions. The basic and essential role in this reflex’ efficacy belongs to the pneumogastric nerve that conducts a “new melody of contraction” to one’s heart.

For instance, in one of experiments people were suggested to breathe at a frequent and rhythmic pace (the task was to model up a “salvo” type of impulse feed that is characteristic of central nervous system in its reaction to impulses that come from periphery). As soon as the number of respiratory movements per minute was exceeding the number of cardiac contractions both rhythms were getting into mutual synchronization with synchronous acceleration\slowing down in some certain diapason. This was explained by excitement irradiation from respiratory center neurons onto those “cardiac” ones (both are located in medulla oblongata) and formation of a single temporhythm by cardiac neurons that by means of vegetative system was transmitted to the heart conduction system.

Having analyzed the data received in scope of mentioned experiments we may suppose that yoga breathworks — pranayamas (kapalabhati, akapalabhati, bhastrikas which number of respiratory movements comes up to 120 per minute) come as a similar mechanism of influence upon human organism. Provided that practice is regular, one may expect better coordination between the work of respiratory, cardiovascular center and vegetative nervous system.

In addition to this there is another interesting phenomenon that physiology acknowledges: in case cordis reproduces central rhythm, electro-physiological parameters of sinoatrial node activity shall change distinctly. Working in traditional regime makes excitement emerge in some certain section of the node, yet when central rhythm is launched there come numerous cells engaged in the process of excitement formation. Regular reproduction of this situation shall result in formation of mostly effective and thus mostly adaptive reaction from the part of the most traditionalistic system of human organism — the cardiac conduction system. Thus, we may speak not only about training of regulatory systems harmonization but also about physiological mechanism of adaptation from the part of conduction system.