Cleansing breath is an Indian breathwork that has become known to the western world due to works of Ramacharaka and S.Yesudian. Its core point is that a deep and slow inhale is followed by fixation of ribcage in expanded state. Lips come protruding and the air is pushed out from lungs in portions due to diaphragm contractions. At the same time all other muscles of exhale process are voluntarily kept in relaxed position. Simple and ingenious, it is also very effective: even if done once it can result in normalization of cardiac rate and elimination of dyspnea. This type of breathing shall be mostly effective if practiced after dynamic warm–up.

In order to understand the way the cleansing breath “works” let us study the processes that take place in organism during this practice.

For the sake of clear understanding let us consider the influence of pranayama separately upon cardiovascular system, respiratory, muscular and nervous systems and single out basic mechanisms that are initiated in organism.

We shall start from the cardiovascular system.

So, we have taken a deep breath. The ribcage has expanded and the diaphragm has lowered down. This shift shall result in reduction of abdominal space and increase of thoracic cavity that in its turn shall cause the rise of intra- abdominal pressure and drop of the intra-thoracic one.

Such pressure differential between cavities shall on its own provoke increase of venous drainage in systemic circulation directed towards the heart (as per pressure gradient). Besides, the rise of intra–abdominal pressure shall cause lumina and capacity reduction of abdominal space vessels where blood is accumulated in rather big volume, so it shall evoke venous difference between abdominal and thoracic cavities and the venous drainage shall thus increase. In this way just one deep breath that we take shall result in increase of venous inflow to the heart that shall lead to intensive blood filling and stretching of right atrium. This comes as a trigger action for the Frank-Starling mechanism — the stroke volume of the heart increases in response to an increase in the volume of blood filling the heart. Increased blood output by left ventricle causes activation of aorta baroreceptors that are responsible for acute pressure regulation. 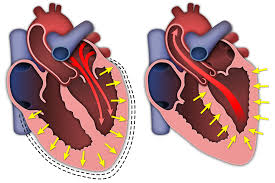 From there, through the fibers of glossopharyngeal nerve, the impulse shall proceed to medulla oblongata that upon analysis of incoming informatio n shall generate a signal on necessity of reducing the cardiac output and cardiac rate. The signal shall be directed onto periphery, to the heart. This shall in its turn cause reduction of arterial pressure and cardiac rate. This effect shall be amplified by forced holding of ribcage in expanded position within the whole period of inhale (we shall by this artificially maintain negative pressure in thoracic cavity for rather sufficient time-period).
We breathe out in portions, due to diaphragm jerky movements. In this way we amplify work of diaphragmatic pump so that delivery of venous blood towards heart shall be increased(the work of diaphragm is referred to as “diaphragmatic pump” since it comes as one of the basic working elements in pumping of venous blood towards heart in systemic circulation. Besides this mechanism those basic also conventionally include contraction of skeletal muscles and suction act of the right atrium. Since venous vessel wall contains no muscles, blood can be pumped only in case there is some “sidewise” activity). This additional mechanism shall be also launching the afore-set mechanism of Starling.
We breathe out in portions within some period of time, taking ca. 20 exhaling acts in average. By means of this we generate rhythmic output of venous blood through the vessels of abdominal and thoracic cavities. In fact, we simulate persistent and regular stimulation of vascular reflexory zone of the aorta (we shall later speak in details about rhythm). We believe this may result in accumulation of nerve endings’ excitement and cause a “salvo” of impulses which main task shall be to bring to the vasomotor center a slightly exaggerated picture of the situation that happens at the periphery (in case of impulse-like increased cardiac outputs, in aorta there shall emerge induced effect of extreme arterial pressure rise). In compliance with reflexive logic this should lead to sufficient responsive reduction of cardiac output and cardiac rate.

It is interesting to know that in cerebrum the structures of respiratory, cardiovascular and motor centers are tightly intertwined. Some authors describe cases of excitement irradiation from one center onto another one. Thus, we may speak about engagement of respiratory center in case vascular-motor center is activated.

system, in particular — to the respiratory center; we shall consider its structure, principles of respiratory rate forming as well as the way cleansing breath influences upon the function of this section of respiratory and nervous systems.

4. Regulation of rhythmogenesis in respiratory center.

Respiratory center comes as clusters of nerve cells (neurons) that are united into hierarchy in compliance with their functions.

In their turn populations of inspiratory pacemakers are controlled by more “high-ranked” neurons of apneustic center (from Greek: α- negation prefix — and πυέω — to breathe) that is situated in the area of cerebelli pons. They facilitate rise of inhale neurons activity by elongating the period of their generation of action potentials. They are respectively activated by an active long-lasting inhale. The center owes its title to the fact that cutting of brain stem directly above this zone resulted in experimental animal’s long-lasting pants (apneuses) that were interrupted by short-time exhales.

The afore-set passage resembles the picture reproduced at the time of cleansing breath: a long-time inhale is followed by a succession of short-time exhales. Thus, we may speak about stimulation of apneustic center while performing a series of such breathing.

Further on it becomes even more interesting. Having made a long-time inhale we concentrate upon exhaling breath. The activity of expiratory neurons is controlled by the pneumotaxic center(from Greek: πυέω — to breathe, τάξις — alignment, placing in order, succession) that is located above the mentioned apneustic center. In addition to this, the main task of the pneumotaxic center — and it comes obvious from its denotation — is regulation of general respiratory rate, correlation between inhale and exhale duration.

By forming certain succession and duration of inhales and exhales we influence alternatively upon different groups of respiratory center neurons, finally facilitating their successive and “correct” engagement into working process. In case of regular practicing this should result in fairly harmonious and well-coordinated processes within the structure of respiration regulation.

5. Harmonization of work of cardio-vascular and respiratory systems. Having recollected the interrelation between respiratory and vascular-motor centers we may speak about heartbeat slowdown aligned with respiratory rate, and respectively about harmonization of these centers’ work subjected to regular practicing.

In addition to the afore-set, the motor and sentient nucleuses of the glossopharyngeal nerve that is responsible for detecting the pressure rate in aorta come as common with nucleuses of the pneumogastric nerve. Excitement of mentioned nucleuses shall stimulate the pneumogastric nerve that is a basic element of parasympathetic nervous system. This shall cause a rather fast “sedation” of organism. Relaxation of skeleton muscles is also possible.

While breathing in this way we perform voluntarily engagement of certain inspiratory muscles (the diaphragm) and deactivation of others (internal intercostal muscles, abdominal muscles). This fact causes interruption of subconscious patterns of respiratory activity and increases the rate of cortical structures in regulation of breathing. Thus, it leads to upgrading of conscious layer of one’s psyche.

This is the effect of cleansing breath. Let us summarize basic impacts:

1. “Express” normalization of respiratory and cardiovascular systems work that may come in useful after intensive warm-up.

2. Training of cardiovascular and respiratory systems.

3. Harmonization of work between cardiovascular and respiratory nervous centers.

This pranayama can be recommended in the following cases:

1) in case fast normalization of haemodynamic parameters is required, for instance, after exertion at the time of warm-up;

2) in case one suffers from some malfunctions of respiratory system, from evolving deviations in cardiovascular system activity (provided the practice is

3) in case one suffers from Somatoform autonomic disfunction with hypertension;

4) for mastering skills of gaining conscious control over one’s organism that comes as a specific feature of yogatherapy and a basis of all yogic practices.

Here we should emphasize the necessity of the ribcage to be held expanded within the whole period of technique performance. Only when the “last exhale” is done we may voluntarily let our ribs go down. It is only in case this provision is fulfilled that the pranayama shall cause the requested effect, and this can be easily checked: the cardiac rate should come normalized by the end of practice, and dyspnea should vanish.

In other cases performance of pranayama shell not bring the result expected; moreover it may intensify the process, i.e. lead to even higher rise of arterial pressure and thus resulting breath acceleration. This effect may come as merely unpleasant in case one’s organism is initially sound, yet should one suffer from weak heart or be inclined to cardiac rate distortion and hypertonia, incorrect performance of this technique may bring illness recrudescence and hypertensive crisis.

By the way, it is this very variant of performance (with active participation of intercostal muscles in the act of inhale) that is offered in books by S. Yesudian and E. Haich, thus being another illustrative example of the fact that one should be conscious in practicing hatha-yoga, as well as pointing out the necessity of scientific studies of yoga practices.