The next line of Yoga Sutra (1.40) dwells on siddhis – at least this is what most of modern commentators think – so I shall give my brief note on this disturbing issue, all the more so as some readers have already become restless in anticipation of this theme. Let me also remind that there’s been an article on my blog dealing with yoga’ view on siddhis that was based on the report made by Dominik Wujastyk.
Now, they traditionally distinguish between supreme siddhis (or mahasiddhis) and minor siddhis – the whole of the rest.
The list of 8 supreme siddhis that can be attained by a practitioner is drawn in both early as well as late yoga texts. This is a well-known information: even Amarakosha – the major Sanskrit thesaurus – has it given on its first page, while most of texts on yoga also consider this to be conventional issue giving no list details yet introducing it as “animaadi” – anima (the first siddhi) and so on (adi).
So, the said siddhis are:
aṇimā;
mahima;
garima;
laghima;
prāpti;
prākāmya;
iṣiṭva;
vaśitva.
Unfortunately, classical texts provide neither their comprehensive descriptions nor instances – maybe once again because of this subject being obvious to ancient authors. This has resulted in significant mystification of mahasiddhis’ understanding in pseudo-yoga environment. Let me draw the example from Wikipedia:
“In Hinduism eight siddhis (Ashta Siddhi) or Eight great perfections (mahasiddhi) are known:[7]
aṇimā: reducing one’s body even to the size of an atom;
mahima: expanding one’s body to an infinitely large size;
garima: becoming infinitely heavy;
laghima: becoming almost weightless;
prāpti: having unrestricted access to all places;
prākāmya: realizing whatever one desires;
iṣiṭva: possessing absolute lordship;
vaśitva: the power to subjugate all[8]…”
The 21st century of course turns the feasibility of miracles that go beyond the laws of physics into a thing unbelievable. Yet the refined pundits of ancient times – i.e., the sutras author and commentators – were also not the ones who could have been mislead by such a nonsense. On the other hand, one wouldn’t want to vulgarize yoga by suggesting this to be description of psychedelic experience. However one can easily understand what mahasiddhis actually are when withdrawing from parlour mysticism and naïve thinking and taking sound arrangement and rational nature of yoga as a consideration basis.
The first four words have been formed out of the adjectives “small”, “big”, “light”, “heavy” by adding the –iman suffix. Thus gariman is weightiness, laghiman is being not heavy, ease, and so on. And they never imply these are physical qualities meant. Moreover, suffixes of the second four always generate words with abstract meaning. Therefore, if we accept siddhis to be a description of not physical yet psychical abilities, the design of the picture shall become quite logical.
Aṇimān is the ability of “zooming in”, that is, going deeper into details. The opposite of this siddhi shall be superficiality, glancing through.
Mahiman is what we now call the “magnitude” of a person and the breadth of his vision.
Gariman is the ability to create significance and value (for instance, the skill of persuasive speaking and being a force).
Laghiman stands for easiness, the abilities of “living and leaving no traces” as they would call it in Tao tradition, without “bullying” others.
Prāpti (“attainability”) is the skill of strategic thinking aimed at achieving long-term objectives.
Prākāmya is being aware of one’s desires and following them.
Vaśitva stems from vaśa – the [imperative] will (that is, having influence on people) and thus corresponds to one’s ability of controlling other people’ will. It is what we would call “power of influence” or “charisma”.
Iṣiṭva is the will as self-control
All of the said is quite realistic though attained through of considerable effort. And I understand this comes as disappointment for those dreaming about levitation and walking on water. But they shall anyhow get this when facing hard reality)). 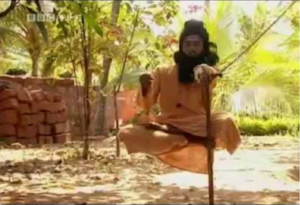