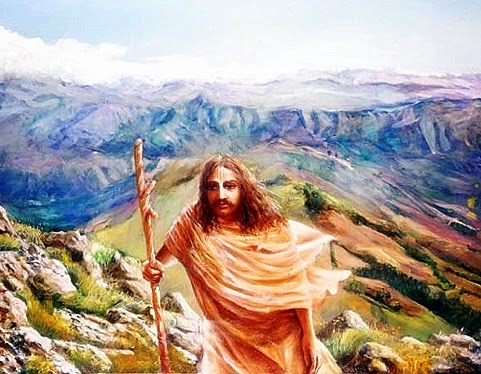 Have you ever paid attention to the fact that allgrand classic epicsare utterly tragic and their endingsare worlds away from thosehappy-ends of Hollywoodthat we are used to? So that even if the principal(allegedly positive) characters attain their goals they experience heavy disappointment all the same.Gilgamesh loses the magical herb of immortality andaccepts his destiny of a mortal man;  Rama is not ableto enjoy the company of his wife whose bringing backcost him significant efforts, and so he suffers from loneliness; the Pandavas, the principle characters of Mahabharata, having survived the tragic death of almost all of their relatives and fellows-in-arms during the war that they had launched are ill-fated in their attempts to ascend to heaven alive and end up finding themselves in the realms of the hell (having in factcommitted a ritual suicide).

The queer death of Krishna, their ally, also resembles one’s conscious quietus with the whole tragedy crowned up byplunging of the Dwaraka that he had built into the deep of the Ocean. Even if we take the Odyssey we cannotrefer to its final as a happy one since Odysseus was no longer a young man upon coming back home and the whole of his life appeared to have been wasted in a dramatic and undesired wandering.

Such logic of the epic piece arrangement is totallyinconsistent with  that habitual edifying stylistic of themajority of works – from folk  tales to already mentioned blockbusters of Hollywood – that sort of programs one to the pattern that if one behaves in the right (good) manner everything will be OK and the ordeals shall end off as a happy end.

And yet they are these very pieces that aregenuinely the ones forming the culture. It issomewhere at the level of internal spiritual intuitiveness or collective unconscious that we feel thatthey contain something significant and educational andcan be understood only upon embracing the wholeglobal sense of the fable, and not only  its details andminor story lines. The already mentioned Mahabharatareeks with protreptic insets and ethic dialogues, explanations of dharma and so on.

However after thework has been read the question still remains: why  didthe characters who were following the dharma that wastold down  in such a sound and detailed manner gotdisappointed and died? Can  dharma be self-contradictory?

It was Bhagavad Gita that has in fact come as aquintessence of this question by laying down throughthe mouth of  Arjuna the following contradiction: bothcase scenarios, one’s  participation as well as non-participation in the battle, are equally  unfavourable andthey cannot be the right ones from the point of Dharma. And though Krishna seems to “have resolved the doubts”, further development of events stillhappened to be tragic.

So what it is that the authors of ancient epics really wanted to tell? Maybe they wanted to say that in case theory runs counter to facts so much the worse it is for the theory? Maybe every epic should be treated as a kind of mental simulation, an attempt to model the eventual outcome of current social ideas and requirements set in critical conditions? To find and disclose the hidden internal contradictions and thus to actualize the margin of the discourse?

To make it simple, having understood Mahabharata we realize it was already at that period that traditional Vedic values and understanding of Dharma appeared to be contradictory and untenable. It may be no accidentthat almost immediately after  formation of Mahabharata main plot India bursted out with  newdoctrines that brought more complicated discourses and ethical principles – from Upanishads to Buddhism and Jainism.

And here we have this wide difference between the great epics on the one hand and tales with blockbusterson the other. The first make the man doubt in the validity of the principles that the man follows, reconsider the basic concepts, they instigate one’s going beyond the margins of habitual discourses and they are the literature for genuine men of spirit. As forthe second ones, they just lull asleep with sweet fairy-tales and enhance the margins of illusions making one proceed with staying in his familiar nutshell.

When reading the great epics we follow themankind in passing  along the Way of spiritualdevelopment actualizing global discourses, detecting their boundaries and extending them within our mind, as if seeing for ourselves the fact that some more complex concepts are required.

But even with Mahabharata at hand one may fail to notice the things that I have just talked about. It is notby accident that numerous religious figures, both Oriental and Western ones, try to analyze their own texts by pieces, by short quotations – and never globally, never studying the text from the point of broader contexts. This allows profound study of the trees when one has yet failed to see the woods.

How can it be associated with Yoga Sutras? In a most direct way. As we might remember, Pramana – the “valid”, “true” knowledge – was the first of thevrittis named by Patanjali. So that one’s comprehension of current discourse margins, extension and complication of personal views and concepts, and thus – the forms of ones’ behavior – come as one of the fundamentals basics of the spiritual advance.

In consideration of the aforesaid one may clearly understand the absurdity of any ideas referred to the so called “traditional” values. The world does change, andapplying to the man the norms that were laid down 4 or 2 thousand years ago shall be the same very oddity as suggesting that he should use a torch of splinters instead of a lamp, a spider-web instead of an antibiotic, and make his calculations by initials instead of acomputer.